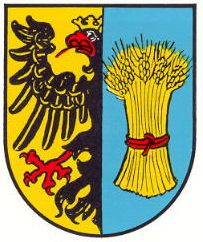 The arms were officially granted on March 4, 1939.

The eagle in the arms is taken from the arms of the Lords von Hallberg, the last feudal lords of the village until the late 18th century. The garb symbolises the importance of agriculture for the village. The historical seal of the villages showed the image of St. Albanus, the local patron saint, with his head in his hand. This seal is known since 1570. Hupp showed the seal as arms for the village in his roll of arms of the Pfalz in 1928, see image below. In the mid 1930s wehen the village council applied for arms, there was no agreement among the council to use the saint and finally a non religious compromis resulted in the present arms.