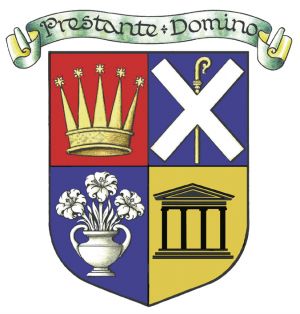 Quarterly- 1st Gules, a celestial crown Or. 2nd Azure, the crosier of the Abbot of Lindores Or, surmounted of a saltire couped Argent. 3rd Azure a pot of three growing lilies Argent. 4th Or, a Doric Portico of four columns sable. In an Escrol is placed this motto: Prestante Domino

In 1239, the Bishop of Brechin licensed the Abbot and monks of Lindores to plant schools in the burgh of Dundee, in a charter confirmed by Pope Gregory IX. They did so, and Dundee's grammar school remained in their hands until the Reformation, when the town council took over. The grammar school, English school, and academy were reincorporated as the High School of Dundee by royal charter of 1859.

The upper quarters of the arms show motifs taken from the seals of Lindores Abbey: the celestial crown of the Virgin, and the saltire of St Andrew (its two patrons), the latter surmounting the Abbot's crosier. The third quarter shows the Dundee arms, and the fourth a classical portico similar to the one that fronts the school, which we may take to represent learning. The words forming the motto are taken from Pope Gregory's original bull, and mean "The Lord standing before"; or, less literally, "With God as guide".