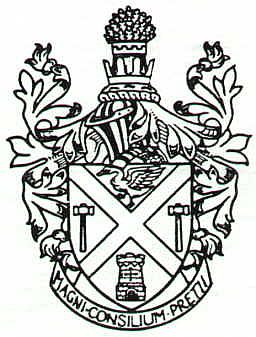 Arms : Per saltire Vert and Gules a Saltire Argent between in chief a Mute Swan rousant proper in base a Tower Argent and in fess two Hammers erect Or.
Crest : On a Wreath of the Colours on Mount Vert issuant from a Crown Vallary Or a Garb of Wheat proper girt with a Circlet per fess embattled Sable and Argent.
Motto : 'MAGNI CONSILIUM PRETII' - Wisdom is of high worth.

The swan, often used as an emblem of rivers, recalls the River Thames in the north. The tower represents the ancient forts of Liddington Castle and Barbury Castle in the south. In the flanks of the shield the engineering and steel industries are symbolized by a background of fiery red and two gold hammers which also recall the "hammerman poet" Alfred Williams.

The crest is derived from that of the Warneford family, identified by a circlet divided, like their shield, by an embattled line into black and white.

The motto refers to the name of the Council, which is also capable of being interpreted as "The Council of Highworth".

Literature : Scott-Giles, 1953 and image from http://www.civicheraldry.co.uk