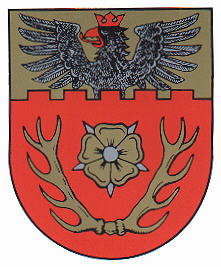 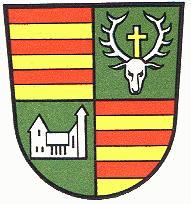 The arms show in the first and fourth quarter the arms of the former monastery-state of Hildesheim, which owned the larger part of the county. The St. Hubertus deer represents the many woods in the county. The castle in the lower part of the arms symbolises the Marienburg.
The great arms of the district show a helmet on the shield, with as a crest a St. Hubertus deer and the shield surrounded by gold and green oak leaves.