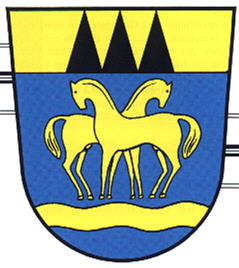 The chief shows three points, one for each of the churches in the municipality (in Eitzendorf, Magelsen and Wechold). The black and gold colours are those of the County Hoya, to which the area historically belonged.

The two horses in the lower half symbolise the agricultural character, as well as the State of Niedersachsen. The 8 legs symbolise the 8 former municipalities. Two horse heads are also a common decoration on houses and farms in the region (see Heemsen, and the Nienburg district), thus the two horses are shown beside each other.

The lower wavy bar symbolises the Weser and the Alvese Lake, which are also symbolised by the blue colour.