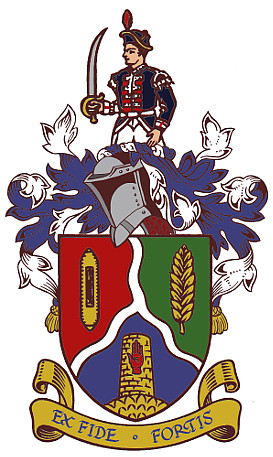 Arms : Tierced in pairle reversed wavy gules, vert and azure, divided argent, in chief a shuttle erect and an ear of wheat erect, and in base issuant from a mount a representation of the Round Tower of Drumbo Or charged with a sinister hand appaume couped gules.
Crest: On a wreath argent and azure, A demi figure rep­ resenting one of the Old Guard of Hillsborough Castle proper.
Motto: Ex fide fortis.