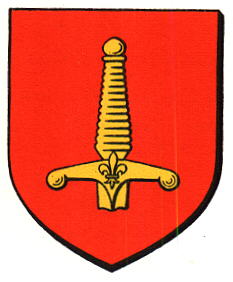 The name is derived from two words "Hilsen", meaning warrior, and "heim" or home. The meaning of Hilsenheim thus is "the home or village of the warrior", and when the fighter did retire, and maybe received the village as a gift, he did break his sword, which is symbolised by the arms.

The French royal fleur-de-lys that is on the sword symbolised (before the 1789 revolution) the village's allegiance to the French king.