From Heraldry of the World
Your site history : Hochstadt
Jump to navigation Jump to search 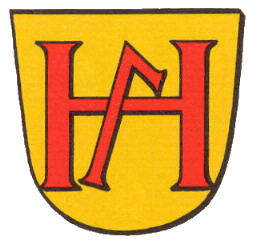 The arms were proposed in 1956, I have no information whether the arms were actually granted.

The oldest seal of the village dates from 1726 and shows a divided shield, with on the right half the arms of Hanau, and to the left a spade and an undefined symbol. The area historically belonged to the Counts of Hanau. The symbol is probably the old village symbol, which has been used on, for example, borderstones. The above arms show the town's initial and the old symbol.