From Heraldry of the World
Your site history : Hof (kreis)
Jump to navigation Jump to search 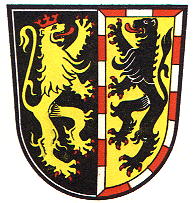 The arms show the lions of the lords of Weida and the counts of Nürnberg.

The lords of Weida established a centre of influence around the town of Hof, after the counts of Andechs-Meranien became extinct in 1248. In 1294 they became vassals of the Wittelsbach dynasty, rulers over Bavaria.

In the early 14th century they were succeeded by the baronets of Nürnberg, who bought out Heinrich von Weida in 1373. The whole area became later part of the County of Bayreuth.