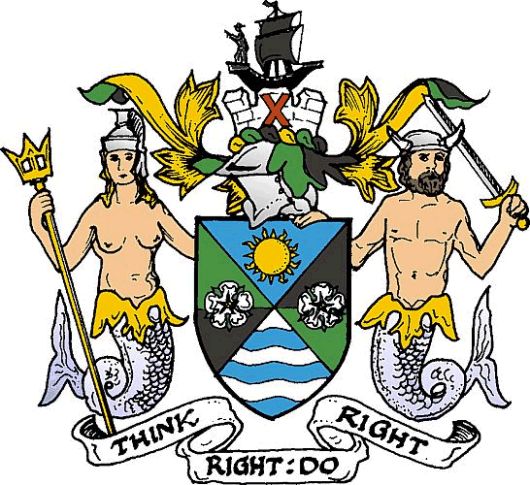 ARMS: Per saltire the chief Azure charged with a Sun in splendour Or the base barry wavy Argent and Azure the dexter flaunch per fess Vert and Sable the sinister flaunch per fess Sable and Vert each charged with a rose Argent barbed and seeded proper. CREST: On a Wreath Or Vert and Sable within a Mural Crown Argent charged with a Saltire Gules an Ancient Ship with one mast and two sails set standing on the poop a Man with Cocked Hat and Telescope beneath his sinister arm Sable; Mantled parted Vert and Sable doubled Or. SUPPORTERS: On the dexter side a Mermaid on her head a Roman Helm proper and holding in her exterior hand a Trident Or and on the sinister side a Triton on his head a Horned Danish Helm proper and brandishing with his exterior hand a Sword Argent pommel and hilt Or. BADGE: A Viking Ship with sail and pennon flying within an Annulet compony Or and Argent.

At the top of the shield upon a blue ground is a representation of the sun shedding its energy form the blue skies of Holderness and is part of the arms of the Hornsea UDC. The wavy blue bars on a white ground represent the North Sea and the River Humber that bound Holderness on its eastern and southern sides. The black and green areas at the sides or flanks of the shield represent both the industrial and the rural character of the Borough and each are charged with the white rose to symbolise that Holderness was historically part of the East Riding of Yorkshire.

The mural crown is commonly used in civic heraldry and the red cross is that of St. Patrick, symbolising the beautiful church of St Patrick at Patrington, that dominates the plain of South Holderness and is well named the Queen of Holderness. A proper representation of this Church formed the crest of the the Holderness RDC. The ancient ship with sails, a man in a naval cocked hat and with a telescope under his arm are derived from the device used by the ancient Borough Hedon. The town early in the 12th century was the centre of commerce and the principal Humber Port and was an established and thriving medieval town and this ship figured on the Town Seal of many centuries.

The mermaid carrying her gold trident and wearing a Roman helmet, was in mythology, the protector of fishermen, her helmet signifies the settlement of Holderness, by the Romans. The Triton waving his sword and wearing the Danish horned helmet represents the Vikings who crossed the North Sea, landed on our coast and penetrated the Humber creeks to settle in the fertile plain of Holderness. Many Holderness villages bear names of Danish origin and the speech of the Danes contributed greatly to the old dialect of the area.

Literature : Image send to me by mail, background from here