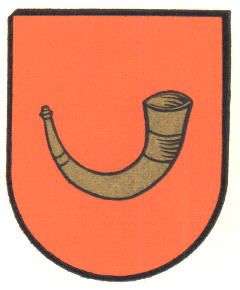 The horn is obviously a canting symbol and is taken from the arms of the medievel Lords von Horn, who used three horns in their arms. The colours were taken arbitrarily.

In the late 1920s Hupp showed totally different arms for Horn in Lippe, as shown below. These arms show the rose of Lippe, a horn and a city gate. This composition was derived from the oldest known seal of Horn, dating from 1248. These arms were never adopted though.