Hospital of Queen Elizabeth in Donnington

HOSPITAL OF QUEEN ELIZABETH IN DONNINGTON 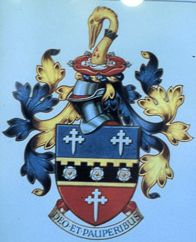 Arms : Per fesse azure and gules, on a fesse Or between three cross crosslets fitchy argent, a bar embattled sable charged with three white roses barbed and seeded proper.
Crest: On a wreath of the colours, issuant from a Tudor rose proper a pelican's head and neck Or, vulning herself gules and murally gorged sable.
Motto: Deo et pauperibus

The arms were officially granted on December 20, 1963

If you have any information on these arms of Queen Elizabeth in Donnington mail us !