From Heraldry of the World
Your site history : Hoyerhagen
Jump to navigation Jump to search 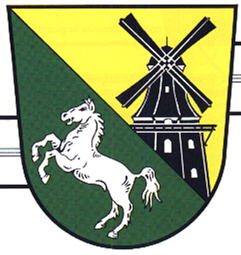 The upper half of the arms shows the Dutch-type windmill in the village, which is a typical landmark. The horse in the base is a symbol for the agricultural character of the village, as well as for the State of Niedersachsen. The black and gold colours are taken from the arms of the Counts of Hoya, who ruled the area for many centuries. The green and silver in the lower half symbolise the green fields and the rivers and streams.