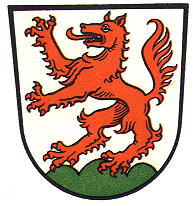 Hutthurm did not have its own seal or arms until 1812. The new seal showed the wolf of the State of Passau, to which the city historically belonged. As no colours were known and to distinguish the arms of similar arms in the former State of Passau, the arms were augmented with a small mountain in the base, and officially granted in 1915.