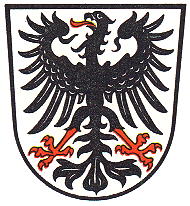 The arms were granted in 1939 and show the Imperial Eagle.

The eagle is derived from the seals of the former Imperial Estate in Ingelheim, dating from the 14th century. Similarly, the old cities of Ober- and Nieder-Ingelheim also used the eagle in their seals and arms.

In many older, 14-17th century, rolls of arms the arms below are given for Ingelheim. The arms are those of the Lords of Ingelheim, but were always shown for Ingelheim as an Imperial City.