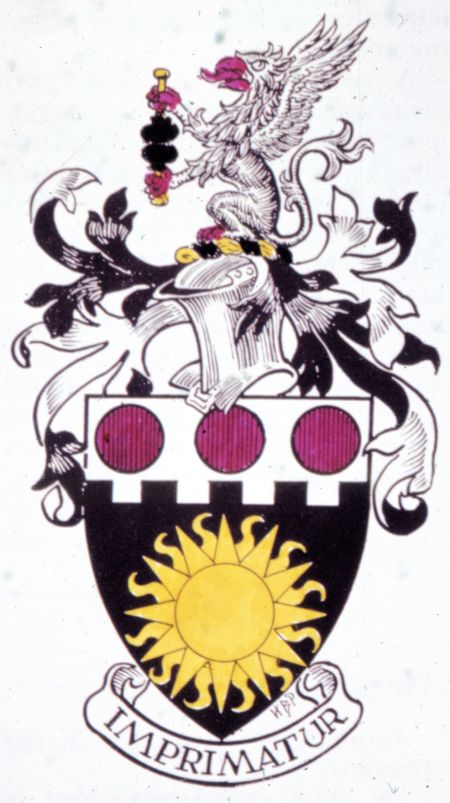 Arms : Sable, a sun in splendour Or; on a chief embattled argent three torteaux.
Crest: On a wreath of the colours, A griffin sejant sable, beaked and mem­bered gules, holding in each claw an ink ball sable, the stocks gold.
Motto: Imprimatur

In keeping with its dignity as an important corporate body, the Institute decided to apply for a grant of arms in 1964.

The sun is the source of light, which is inherent in modern photo-mechanical printing methods and such new developments as film-setting. It could also, by implication, signify that printing was the source of enlightenment. In addition, it was also used as a device by Wynkyn de Worde, who could be described as the father of commercial printing and publishing in England, and his device was displayed in Fleet Street in 1500.

The three torteaux on a chief embattled, resemble exactly the diagrammatic version of inking rollers on a relief or letterpress surface, using in printing instruction.

The colours might refer to various inks and the argent field to paper.

A demy griffin a griffin sejant was added as a crest, based on earlier arms for German printing guilds that used an eagle as a crest. The griffin holds some ink balls.

Historically the word 'imprimatur' had come to mean a licence to print, but it can also be interpreted literally 'Let it be printed' or, in modern parlance, 'O.K. for press'.