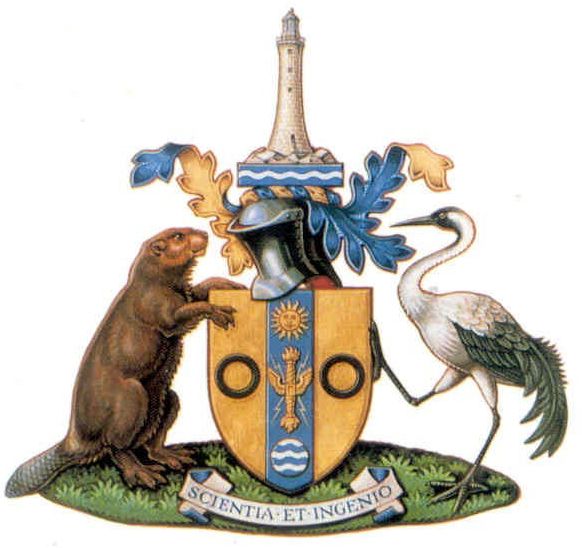 Arms : Or, on a pale azure between two annulets in fesse sable, a thunderbolt between in chief a sun in splendour of the first and in base a fountain proper.
Crest: On a wreath of the colours. Upon a billet fessewise azure charged with a fesse wavy argent a representation of the Eddystone lighthouse upon rocks proper.
Supporters: Oa the dexter side a beaver and on the sinister a crane, both proper.
Motto: Scientia et ingenio

The sun, thunderbolt and fountain symbolise the forces of heat, electricity and water. The Institution’s royal charter refers to civil engineering as the art of directing the great forces of power in nature for the use and convenience of man.

The annulets represent the science of mathematics used by civil engineers.

The Eddystone Lighthouse was used on the Institution’s first corporate seal after being granted its royal charter in 1828. It was the principal work of John Smeaton who was the first person to describe himself as a civil engineer.