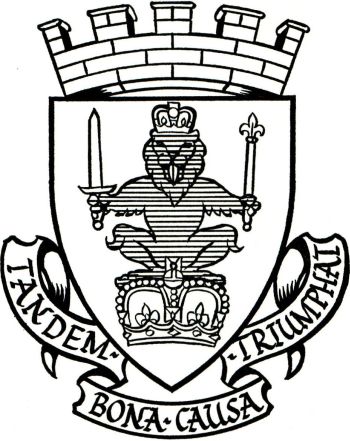 Argent, on an imperial crown Or, a lion sejant affrontee Azure, imperially crowned Gold, holding in his dexter paw a sword and in his sinister a sceptre both Proper.

Above the Shield is placed a Burghal coronet and in an Escrol below the Shield this Motto "Tandem Bona Causa Triumphat".

Irvine is an early Baronial Burgh dating from between 1214 and 1249, was created a Royal Burgh by King Robert II in 1372.

The arms show the crest of the Kings of Scotland, a crowned lion sitting on a crown and holding the sword and the sceptre. There is an impression dated 1680 of the reverse of one of the oldest known Burgh seals which shows a similar device.

The right to use the Royal crest is said to have been granted to the citizens by King Robert I in return for special services they had rendered to him.

In 1927 Lord Lyon Swinton was unable to grant the arms in the gold and red Royal colours but the choice of silver and blue is a happy one as these were the livery colours of the Bruce family before they assumed the arms of the Lords of Annandale.

The Latin motto - "A good cause triumphs in the end" -is thought to date from and to refer to the Restoration of King Charles II in 1660; it could also be an appropriate reference to King Robert I and his long but successful struggle for Scottish independence.