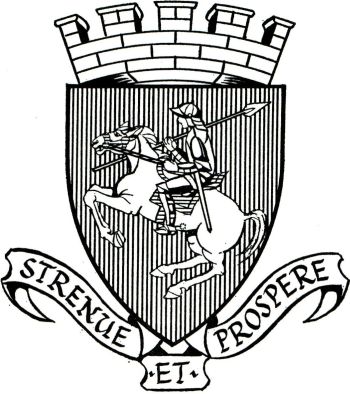 Gules, on a horse saliant Argent, furnished Azure, a chevalier armed at all points, grasping in his right hand a kind of lance (called the Jedburgh Staff) Proper.

Jedburgh has certainly been a Royal Burgh from between 1159 and 1165, and thus probably a creation of King Malcolm IV or King William the Lion.

The arms were the subject of dispute between the Town Council and Lord Lyon Erskine. From about 1650, the Burgh had used a seal which showed "a unicorn trippant or passant", but Lord Lyon Erskine apparently regarded this as an improper use of part of the Royal arms and declined to register it.

The arms of Jedburgh granted in `680 therefore show one of the famous Border riders armed with a Jedburgh or Jethart staff; the reason for the red field is not clear.

The Latin motto, the choice of which was left to the Lord Lyon, means "Stoutly and Well". The

The coronet was coloured reddish-brown as the "Proper" colour to represent the sand­stone of Jedburgh Abbey and the surrounding district.

Gules, on a horse saliant Argent, furnished Azure, a chevalier armed at all points, grasping in his right hand a kind of lance (called the Jedburgh Staff) Proper.

Above the Shield is placed a coronet appropriate to a statutory Community Council, videlicet:- a circlet richly chased from which are issuant four thistle leaves (one and two halves visible) and four pine cones (two visible) Or; and in an Escrol below the same this Motto "Strenue et Pro­ spere". 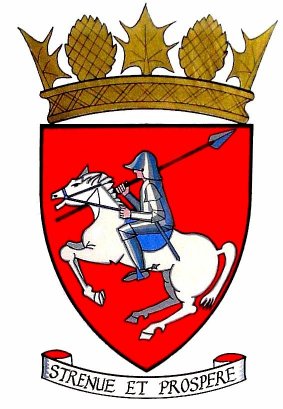 The arms are the same as the burgh arms, but with a different crown.