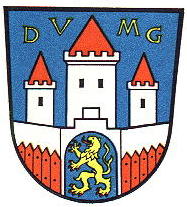 The oldest seal of Jever dates from 1347 and shows the patron saint, St. Cyriacus. The present arms are based on the seal made in 1572, at the same time when the city rights were confirmed.

The arms show a city wall with three towers, with in the gate a lion. The lion is derived from the arms of the Lords of Jever, who ruled the city until 1575. The letters DVMG stand for Dorch Vroichen Maria Gnade, which means By favour of Lady Mary, referring to Maria von Jever, who confirmed the city rights.

In the 1930s Hupp showed the arms without the letters and with a slightly different design :