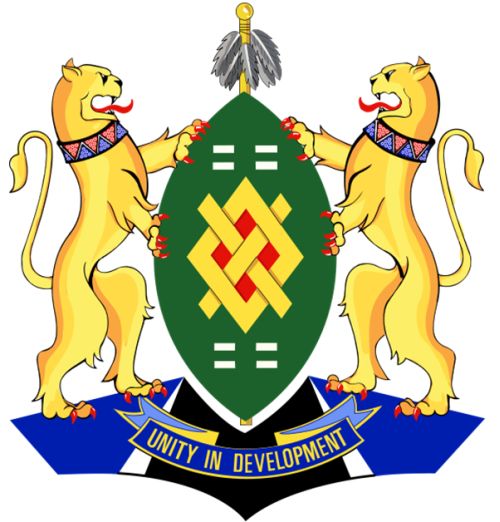 Arms : Vert, a fret couped Or the mascle voided Gules between in chief and in base respectively four shield thongs Argent
Supporters : Two young lions Or, armed and langued Gules, each gorged of a beaded collar dancetty throughout Gules and Azure, the triangles fimbriated Or
Compartment : A ground, the flanks Azure and the centre Sable, separated from one another by means of narrow piles inverted, Argent
Motto: UNITY IN DEVELOPMENT

Arms: Vert, a fess between three battery stamps Or
Crest : A lion passant quadrant, resting the dexter paw on a battery stamp Or
Wreath and Mantling: Or and Vert
Motto: FORTITER ET RECTE (Boldly and Rightly).

The previous arms of Johannesburg were originally granted under Letters Patent from the College of Arms (London) in October 1907 and the full achievement in June 1939. The arms were registered with the South African Bureau of Heraldry in November 1966.