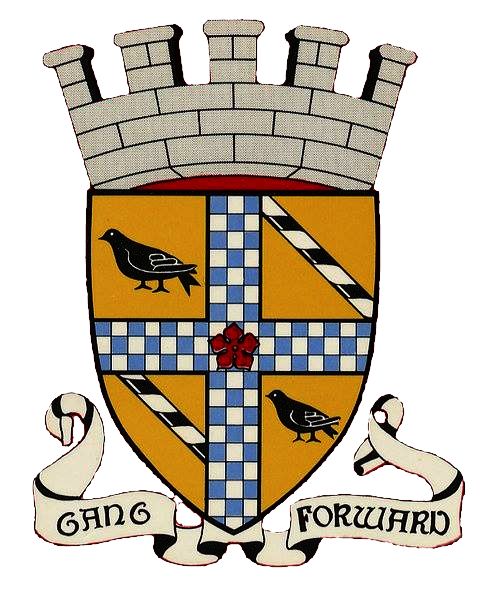 Or, on a cross chequy Azure and Argent, cantoned between two martlets Sable in the 1st and 4th quarters, and two bendlets wreathed Argent and Sable in the 2nd and 3rd Quarters, a cinquefoil Gules at the fess-point. Below the Shield which is ensigned of a Burghal coronet is placed in an Escrol this Motto "Gang Forward".

Johnstone was founded in 1781 George Houston of Houston and Johnstone`on the site of a hamlet called Brig o'Johnstone, and became a Police Burgh in 1857.

The arms retain, by special request of the Town Council, the cross pattern used on the Burgh seal adopted in 1892. The gold field, the black martlets and the silver blue chequy come from the arms of Houston of Johnstone. The silver/black bendlets represent twisted threads and thus the weaving industry once so important to the Burgh. The red cinquefoil in the centre of the shield recalls the town's connection with Paisley Abbey; originally it was in the Abbey parish. T

he Scots motto comes from the Burgh seal.