From Heraldry of the World
Your site history : Jonas Gregorio de Souza
Jump to navigation Jump to search

Country of origin : Brazil
Place of origin : -
Granted : No
Granted/officially recorded by : - 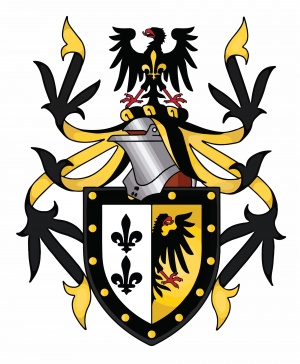 Per pale argent and or, two fleur-de-lis sable in pale, and issuant from the line of division the sinister half of an eagle displayed sable, armed and langued gules, within a bordure sable charged with thirteen roundels or.

These arms are inspired by a junction of the arms of two families the armiger descends from: Maciel and Morais-Sarmento. The arms of Maciel exhibit the fleur-de-lis and eagle, whereas the arms of Sarmento exhibit the thirteen roundels that were turned into a bordure. The colours have been modified. The choice for or and sable reflects the armiger's German ancestry, evident in the second partition.