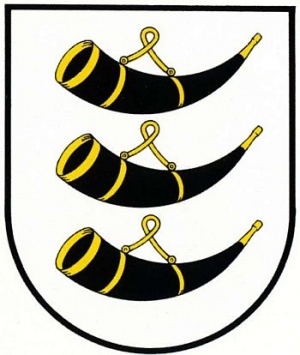 There are two explanations of the meaning of these arms; one stating that they are the arms of the Jordanów family, as in 1564, King Zygmunt August allowed the governor of Kraków, Spytek Wawrzyńcowi Jordanów of Zakliczyn to establish a town here. The Jordánow family was part of the Trąby family clan, which used three interlaced horns in their arms.

The other explanation is that the three horns are a symbol for the salt mine in the village (owned by the Wieliczka family). The horns were used to announce breaks and the end of the day.