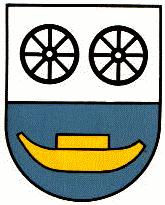 The arms were officially granted on November 15, 1971.

The arms refer to the importance of Julbach as a harbour on the Donau river for the salt transports from the Alps to Bohemia. The salt was loaded from ships on to wagons for further transport. This is symbolised by the wheels and the ship.