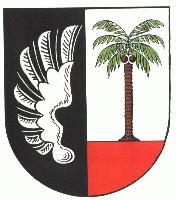 The right part of the arms show a wing, which was used on the crest of the family Von Cöthen, who were probably the founders of the castle in Köthen. The family was mentioned in Köthen in 1156 and became extinct in the 14th century.

The palm tree in the left part of the arms is the symbol of the Palmenorden, an association founded by Prince Ludwig von Anhalt-Köthen (1579-1650) in 1617. The association, officially the 'Fruchtbringenden Gesellschaft' was an association of nobles, scientists and poets and had as their main aim the 'Care of the German language'. It had its seat in Köthen and existed only until 1680.