Difference between revisions of "Kalmthout"

From Heraldry of the World
Your site history : Kalmthout
Jump to navigation Jump to search 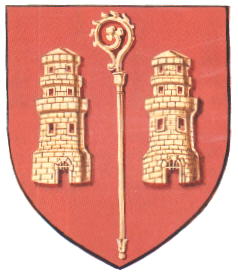 A seal for the council of the estate of Essen-Kalmthout was first mentioned in 1402, but the oldest know existing seal dates from 1442. The seal showed a crosier, symbol for the abbot of Tongeren Abbey, to which the estate belonged. The crosier is flanked by two small figures, most likely small towers, one for each of the two villages.

Seals with similar composition have been in use until the early 19th century when the French Imperial Eagle replaced the old composition. After the fall of the French Empire, the village adopted a seal without any figures, but just with a text. First in Dutch later in French. In 1837 a new seal was made, again in French, but with the national lion of Belgium. In 1889 the text became Dutch again.

In 1905 the local council wanted to adopt arms, which were designed based on the old seal. Unfortunately the tower was enlarged to two floors, whereas the final royal decree added another floor. The arms were granted in 1911 and have been in use ever since.