From Heraldry of the World
Your site history : Karben
Jump to navigation Jump to search 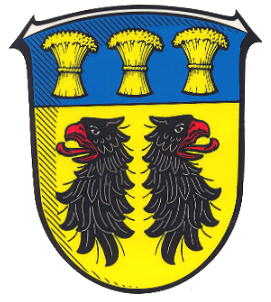 The arms were newly designed in 1971 and show in the upper half the canting garbs (Garben), which were also present in the arms of Okarben and Klein Karben. The base shows the eagle heads taken from the arms of Rendel.

Originally the proposal showed also a cross for the Teutonic Order, which had many possessions in the area. The cross was not added to the arms, to avoid overly complicated arms.

Literature: Image and information provided by the Karben council