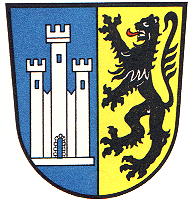 Kaster received city rights in 1328 by Count Gerhard of Jülich. The oldest seal dates from the same time and shows already the combination of castle and the lion of Jülich. All later seals and images show the same combination. In the 19th century the city started to use the arms, which were officially granted in 1939.