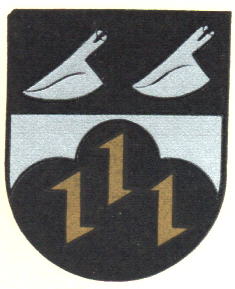 The three hooks in the arms are the symbol of the Amt Hemer, to which the village belonged. The hooks are placed in a mountain as an indication of the mountaneous character of the area. The upper part shows two plough irons and symbolise the agricultural character of the village at the time.