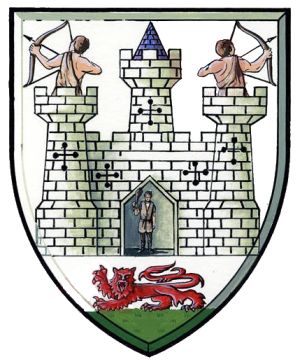 Argent a castle of three towers, the centre one the tallest and topped with a spire, on each of the others a man issuant shooting an arrow from a bow, in the doorway in the centre a man bearing a cudget in the dexter hand all proper; on a mount in base vert a lion passant guardant gules.

The design of these arms is taken from the Ancient Common Seal of Kilkenny which dates from the early 13th century when the town was granted a charter. The tower, man with club and the archers symbolise a vigilant fortress. The lion is the English lion.