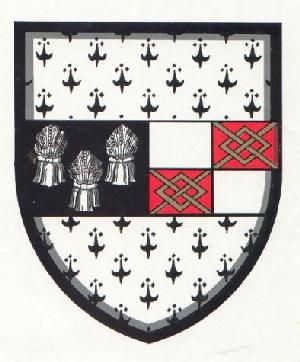 The arms were alledgedly granted in 1665.

The ermine generally symbolises a ducal mantle, and specifically in this instance, the family of Butler, Dukes of Ormond out of whose estates the present day County Kilkenny was carved.

The fess or broad band across the centre of the shield contains the arms of two families, one Gaelic, the other Norman, thereby signifying the historic and harmonious fusion of these two great Irish traditions within the County.

The silver garbs or sheaves on a black field heraldically represent Dermot MacMorrough, King of Leinster, while the gold fret on red is associated with the family of Den or de la Denn who, according to Samuel Lewis, were possessed of the Castle of Grenan near Thomastown.