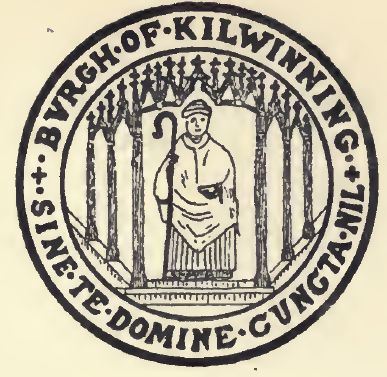 Kilwinning became a Police Burgh in 1889 and had no official arms.

The above seal from 1892 shows a figure of St. Winning, an Irish missionary who is reputed to have come to the district about 715 and to have founded a church there. In 1140 a monastery was built by one of the architectural fraternities which had received Papal permission to call themselves Free Masons; thus Kilwinning became the cradle of Freemasonry in Scotland. The device on the seal is based on an old seal of the monas­tery and the Latin motto - "Sine Te Domine Cuncta Nil" (Without Thee, Lord, all things are nought) is part of an inscription which appeared on a house belonging to the monastery.