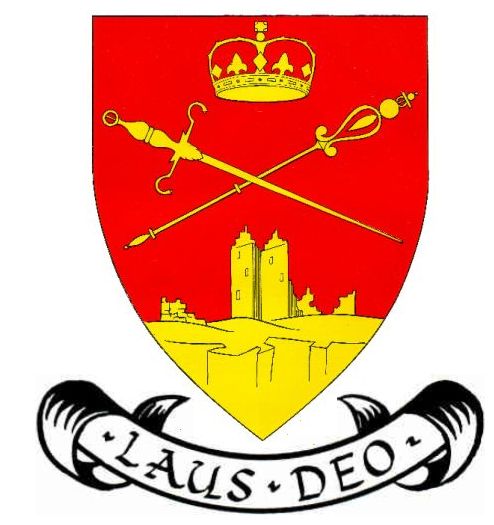 Gules, the Sword of State and Sceptre of Scotland in saltire, in chief the Crown of Scotland, and in base on a rock a ruined castle all Or.

And in an Escrol below the Shield this Motto "Laus Deo".

The arms show in the upper part the sword, crown and sceptre of Scotland, and in the base Dunottar Castle. The arms refer to a very important event in Scottish history. In 1651 William Keith, the 6th Earl Marischal, took the Scottosh regalia to Dunottar Castle for safekeeping against the army of Oliver Cromwell. The castle was subsequently besieged and the changes of holding the castle were slim. The castle governor, George Ogilvy of Barras and the minister of nearby Kinneff parish, James Granger, mananged to smuggle the regalia out of the castle and buried them under the floor of the parish church. They remaine dthere safely until restoration of the monarchy in 1660.

The motto is taken from the arms of the Viscount of Arbuthnott, as the 14th Viscount was Lord Lieutenant of the county.