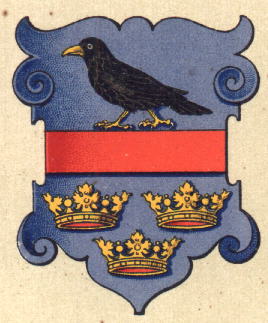 The Kingdom of Galicia (now part of Poland) originally was a Ruthenian (=now part of Ukraine) principality, which became a Kingdom in the 13th century. In 1340 the kingdom became part of Poland. The Hungarian Kings, however also claimed the territory. After the first Polish division in 1772 it was acquired by Austria, but was incorporated into the Austrian part of the Empire.

The arms were first used in the arms of King Mathias of Hungary, as a claim for the territory in 1475. Later Kings of Hungary and Emperors of Austria-Hungary used the three golden crowns for Galicia. In 1804 the red bar and the crow, derived from the arms of Halicz were added. Halicz was the original capital of Galicia. From 1772-1918 Lemberg (now Lviv, Ukraine) was the capital.