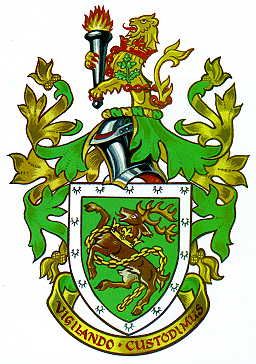 The arms were officially granted on November 4, 1974.

The design includes many features of the arms of the former Kingswood UDC. The green background is symbolic of the forest which once covered a substantial part of southern England, the golden stag wearing the Plantagenet Crown of Henry III serving as a reminder of Kingswood's associations with the Royal hunt at a time when the area was known as the King's Chase. The chain worn by the royal stag represents the location of the new Kingswood in the King's Chase. The crown of fleurs de lys and colours of the mantling have been taken from the former Kingswood arms and the basic colours of green and gold, have been used to perpetuate the symbolism of the Chase.

The golden lion represents the Royal lions of England and the crown and chain it is wearing are linked with those worn by the stag. The sprig of oak with three acorns symbolises the union of the former Kingswood and Mangotsfield Urban District Councils and Warmley Rural District Council to form Kingswood District Council. The torch represents progress and is coloured black to represent the coal mining industry which once dominated the area. 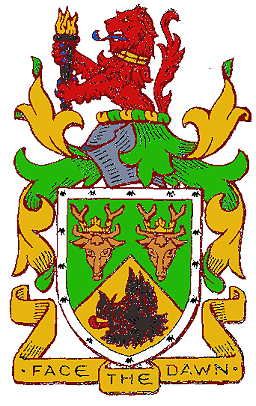 Arms : Per chevron vert and Or, in chief two stags' heads caboshed proper crowned with a coronet composed of four fleurs-de-lis set upon a rim of the second, and in base a boar's head erased sable; all within a bordure ermine.
Crest : On a wreath of the colours, A demi lion gules gorged with a chain Or and holding in the paws a torch erect sable inflamed proper.
Motto: Face the dawn