From Heraldry of the World
Your site history : Kintore
Jump to navigation Jump to search 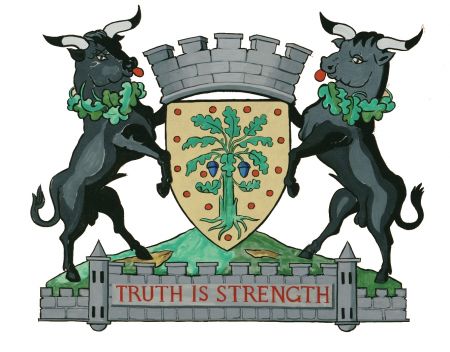 The Shield ensigned of a coronet proper to a Burgh Royal and on a Compartment suitable to a Burgh Royal along with this Motto "Truth is Strength", are set for Supporters two bulls Sable, langued Gules, their horns Argent tipped Sable, each gorged with a chaplet of oak leaves Proper.

Kintore is reputed to have existed since the days of King Kenneth MacAlpin (843-858), and seems to have been made a Royal Burgh between 1187 and 1200 by King William the Lion.

The arms are based on the old Burgh seal.

Tradition has it that when King Kenneth was fighting in the district against the Danes, he was helped by the people of Kintore, who covered themselves with oak branches and drove their cattle towards the enemy. This legend is recalled by the arms. The gold and red colours are those of the Royal House and also appear in the arms of the Keith family; the Forest of Kintore was granted to Robert de Keith, Great Marischal of Scotland, by King Robert I, and the Earldom of Kintore is held by another branch of the Keith family.
The acorns have been made blue for artistic reasons and the supporting bulls are Kintore cattle which have black coats and white horns with black tips.

The motto is an answer to the Keith motto "Veritas Vincit"­ "Truth prevails.