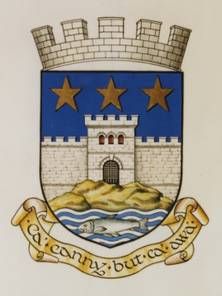 Azure, a wall towered and embattled Argent, port Sable, standing upon a mount Proper; in chief three stars of five points Or, and in base in a stream a fish naiant Proper.

Above the Shield is placed a mural coronet and under the same this Motto "Ca' Canny But Ca' Awa' ".

Kirkintilloch developed around one of the forts on the Roman Wall built by Antonine about A.D. 142. It was granted as a Burgh to William de Comyn, Baron of Lenzie and Lord of Cumbernauld, about 1214, and in the 14th century, the Barony was granted first to a Fleming, then to a Kennedy and for a time thereafter the Burgh may have lapsed; in I526 it was created a Burgh of Barony in favour of Malcolm, 3rd Lord Fleming.

The arms which resemble the device on the Burgh seal show a towered wall to represent the Roman fort (on Antonine's 'Nail) which formerly stood on Peel Hill at Kirkintilloch. The water represents the Luggie and Kelvin rivers which pass through the town, and the fish a trout in them. In the upper part of the shield, the blue and gold colours of the Comyns are used; the three stars are said to refer to the ancient ecclesiastical affairs of the Burgh and to the symbolism of the triad (connected with the Holy Trinity) and the pentalpha (five-pointed stars which refer to the wounds of Christ); these are symbolic of health and strength.

The Scots motto refers to the former weaving industry and is mentioned in Kirkintilloch Town and Parish, by T. Watson (1894).