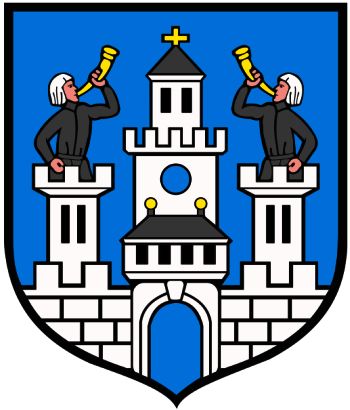 The arms of the city (German name Freystadt in Niederschlesien) show a city gate and are based on the oldest seal of the city. This seal is known from 1310 and shows a castle or city (Stadt=city) with three towers. On both outer towers a guard blowing a horn can be seen. This is the seal on which the present arms are based. All seals dating from the late 15th century and later show only three towers, and no guards. In the 17th century a fence was added to the gate, and this composition was used as the arms of the city in the 19th and early 20th century.