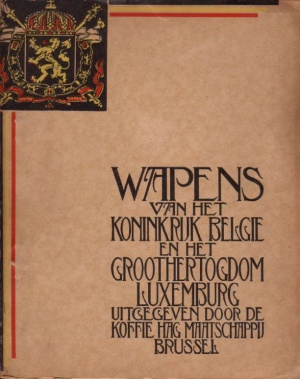 The Belgian Coffee Hag albums are unique, as they are issued in two languages, Dutch and French. The series of Switzerland and Czechoslovakia are also issued in two languages, but the albums itself are bilingual; for Belgium two separate series in either language were issued. Each series consisted of three small albums, with loose sheets. Per sheet 9 arms were shown, with the description and some background on the back of the sheet.

The stamps are numbered by province and issued arbitrarily, not alphabetically as in most other countries. This system is identical to the Dutch albums. The albums were issued from 1930 onwards. The series were not issued completely by province, but the sheets were issued in batches consisting of parts of multiple provinces. The sheets and stamps were reprinted approximately halfway completion. This has resulted in two different editions of the series, as the second edition has a slightly different lay-out and many errors were corrected. The main texts are identical. For both languages two editions exist. The second half of each province only exists as the second edition, with the exception of the last pages. The last pages of each province were initially printed with some extra spaces for later additions. As these were only partly issued, new final sheets per province were issued without the additional spaces.

The Dutch and French texts are near-identical for the arms and descriptions. The main difference is in the (short) additional text, which was issued after the Luxembourg province pages. Unlike the albums from most other countries, the Belgian albums have no separate chapters or texts on coffee, the company or the health effects of coffee. There is only one small text, which is completely different in Dutch and French. The Dutch text deals with coffein-free coffee and is entitled 'Wetenschap in dienst der hygiene' (The scientific basis for hygiene), although the text does not deal with hygiene. The French text is entitled 'L'enorme travail du coeur' (the enormous work of the heart) and deals with the heart, and the effects of coffein-free coffee to reduce the pressure on the heart.

In addition the albums also contained a 17-page introduction to heraldry, with numerous examples from the Belgian towns. These were referred to by their numbers. The second edition has the same text, but the numbers and examples have been updated with the newer stamps. The date on both texts, however, is February 1930. The text was written by Fidèle-Gabriel, a priest who also illustrated the book on the heraldry of Belgian provinces (issued in 1919 Dutch and in 1921 in French and written by E. Gevaert).

Unlike some other albums, there is no text on the back of the stamps.

As in many other countries, the albums and the stamps were heavily advertised in newspapers. In this case both in Dutch as well as in French speaking newspapers. Some examples below:

Until the early 20th century the official language in Belgium was French, also in the Dutch speaking parts. In the early 20th century Dutch became more and more accepted and many Dutch speaking communities started to use Dutch as the official language. Unfortunately many towns at the time had no official Dutch spelling of the name. Only by law of June 21, 1929 the official names for the Dutch municipalities were published. As most of the stamps were already printed in 1928, many names on the stamps differed from the official names published. In the albums this was sometimes corrected, but most stamps were corrected during the second edition. The problems with the names is described (in both languages) in a small texts after the introduction to heraldry. In the albums sometimes up to 4 different names were used for the same town. All images can be seen in the image category.

In the French part there are only a few spelling errors that were corrected in the second edition. Malmédy and Péronnes were initially published with an 'e' instead of an 'é', Chimay was published as Chimai and Charneux was published as Charmeux. Also, the first 16 stamps of the province of Liège show the name of the province as Liège, the second half shows the name as Liége. The second edition of the stamps only shows Liége.

For more on these albums, including indices, variations and all pdf's of the complete albums, click here.

Advertising in the Gazet van Antwerpen May 5, 1934: 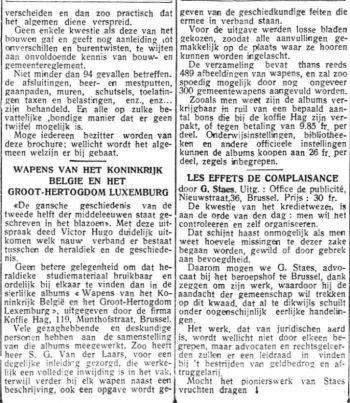 Notification of the Department of the heraldry from 1935 on the three albums: 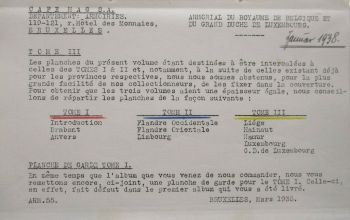