From Heraldry of the World
Your site history : Kokava nad Rimavicou
Jump to navigation Jump to search 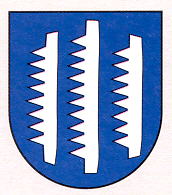 The arms show three saw blades, symbolising the historical water powered wood cutting mills. Forestry has been of importance to the village during the centuries. The arms are based on the historical seals of the local council, dating from 1596 and 1615 and used until the mid 19th century.