From Heraldry of the World
Your site history : Konnersreuth
Jump to navigation Jump to search 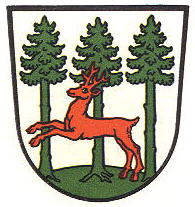 The arms were granted in 1468 by Nicolaus, Abbott of the Waldsassesn Abbey, to which the town belonged at the time. On July 10, 1978 the arms were confirmed.

The deer, a roebuck or Reh, and trees symbolise the Rehberg forests near the town. The composition as such has not changed during the centuries, but the size, shape and colour of the deer and also the trees has differed widely. Compare also Rehau.