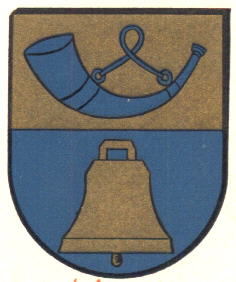 The bell in the arms symsolises the fact that the village is the oldest parish in the area and was still in the mid 20th century the most important parish in the Amt Ferndorf. The bell also refers to a local legend of the Bell of the Kindelsberg (Die Glocke am Kindelsberg).

The upper part shows a horn, the symbol of the Amt Ferndorf, to which the municipality belonged.