From Heraldry of the World
Your site history : Kronach (kreis)
Jump to navigation Jump to search 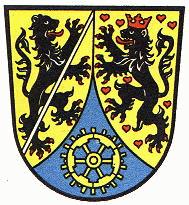 The lower part shows in the colours of the Cistercian abbey of Langheim, a wheel. The wheel symbolises the forestry and many small rivers in the district, and the many water mills therein.