From Heraldry of the World
Your site history : Kulmbach
Jump to navigation Jump to search 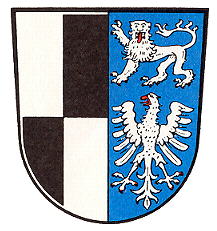 Kulmbach most probably was granted city rights in the 13th century. In 1397 it became the main seat of the (Hohen)Zollern family, one of the most powerful dynasties in Germany. The right part of the arms (the quartered field) shows the arms of this family. The left part shows the eagle and lion taken from the arms of the counts of Andechs-Meranien.

The arms as such are known since 1569, with the present colours. In the 17th-19th century the colours often changed, making the quarters blue and white and the lion red on black.