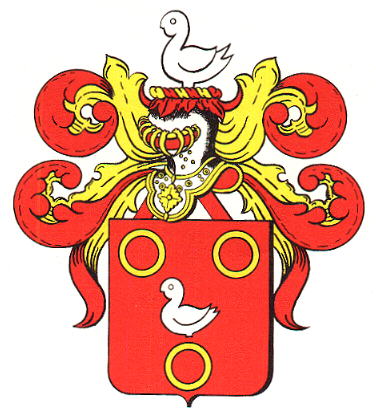 The arms were officially granted on August 6, 1980.

The first attempt by the council to adopt arms dates from 1959. The council applied for the arms of the De Zeelandere family, Lords of Kuurne from 1642-1715. The Belgian College of Arms however did not agree with the proposal, as no historical seals were known, in which the council had actually used these arms. The arms were used by the municipality though, see image of a poice badge below.

In 1977 the Dutch-speaking community in Belgium decreed that all municipalities were to adopt a coat of arms. After a long discussion the council applied for the arms of the last known Lords of Kuurne, the family Le Paige de Bar. In 1774 this family, as well as the Count of La Tour-Saint-Quentin and Jozef Ruijs all claimed the Kuurne estate and title. It lasted until 1793 before the matter was settled and the Le Paige de Bar family finally acquired the estate and title. For only one year, as in 1794 the French conquered present Belgium and all estates and titles were abolished. Nevertheless, the council applied in 1980 for the new arms, which are identical to the arms of the Paige family. The arms were based on the 18th and 19th century seals of members of the family (see below).