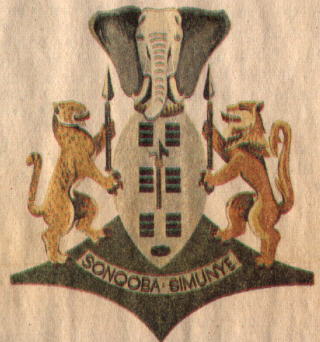 The arms were officially granted on September 8, 1972.

The shield itself is the shield of the Royal regiment of the Zulu tribes. It symbolises the protection for the people. The sceptre is a symbol of Royal power. The headring in the base is a symbol of maturity, as it is only worn by man of high standing. The elephant symbolises power. The two supporters (a natural lion Leo leo and and leopard Leo pardis) also hold traditional spears, and symbolise the will of the people to defend themselves.

The motto Sonqoba Simunye can be translated as "We will overcome (or triumph) together; We are one."