From Heraldry of the World
Your site history : Lübbecke
Jump to navigation Jump to search 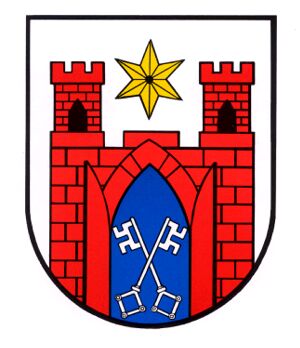 The arms were officially granted on October 7, 1974.

Lübbecke got city rights in 1279 by bishop Volkwin van Schwalenberg, bishop of Minden. The arms are a combination of the star taken from the arms of Schwalenberg and the crossed keys of St.Peter, the patron saint of the diocese of Minden. The oldest seals showed a bishop sitting on a throne under an arch. Above the arch the star was placed. Later seals, in the 14th century, show only the keys with the star. Initially the star was placed in a separate shield. In the 16th century the arms got the colours silver and red and the shield around the star was removed. The arms were first officially granted in 1909, see below. 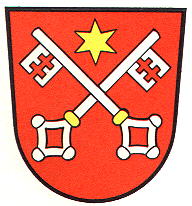 After the merger in 1973 the city needed new arms. The new arms still show the star and keys, but now combined with the city gate as used on the medieval great seal of the city.

In 1973 three other designs, see below, were made for the new city arms. The first combined the arms of the city in the upper half with the arms of the (former) district (Kreis) in the lower half. The second adds a helmet to the star and keys, which is taken from the helmet and mantling used by the city in the 19th century. It also symbolises the strength of the population. The third again takes the symbols from the old district and city arms.