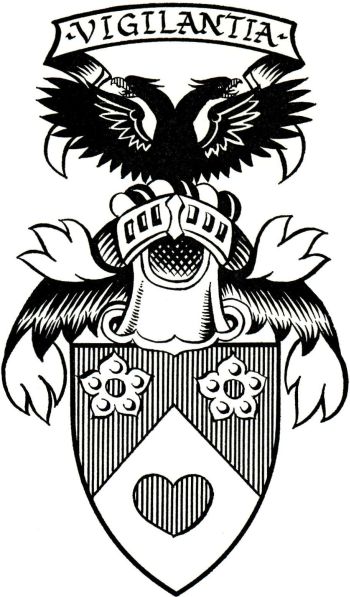 Parted per chevron Gules and Argent, two cinquefoils pierced in chief, and a man's heart in base counter­ changed.

Above the Shield is placed an Esquire's Helmet with a Mantling Gules doubled Argent, and on a Wreath of the proper Liveries is set for Crest a demi-eagle displayed with two heads Sable, beaked Gules, and in an Escrol over the same this Motto "Vigilantia".

The arms show two cinquefoils, taken from the arms of the Clam Hamilton, one of the most prominent families in the county. The heart is taken from the arms of another important family, the Clan Douglas. The heart is the heart of Robert the Bruce, King of Scotland, who wanted his heart to be buried in the Holy Land. This mission was entrusted to Sir James Douglas in 1330. Sir John died near Spain and the heart was returned to Scotland to be buried in Melrose Abbey. Ever since the heart is part of the Douglas arms.