From Heraldry of the World
Your site history : Lancaster
Jump to navigation Jump to search 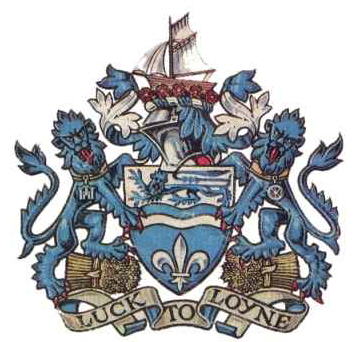 Arms : Per fess wavy Argent and Azure a Fess wavy between in chief a Lion passant guardant and in base a Fleur-de-Lys counterchanged.
Crest : On a Wreath of the Colours in front of a Morecombe Bay Fishing Boat sail set proper five Roses in fess Gules barbed and seeded proper.
Supporters : On either side a Lion guardant Azure that on the dexter gorged with a Collar pendent therefrom by a Ring Or a Grey Stone Castle of three Towers proper that on the sinister gorged with a like Collar pendent therefrom by a like Ring a Railway Engine Wheel proper each resting the interior hind foot on a Garb fesswise the ears inward Or.
Motto: 'LUCK TO LOYNE'

The fleurs-de-lis and lion were part of the old arms of the city, and are themselves derived from the arms of the Duchy of Lancaster. The silver wave is for the River Lune and the wavy chief for Morecambe Bay.

The five red roses in the crest stand for five Lancashire councils combined. The fishing boat was the crest of Morecambe.

The supporters are similar to those used by the previous city council. They are differenced by a castle for Lancaster and a wheel for Carnforth, an important railway town. Each lion stands on a garb for the two Rural District Councils.

The motto "Luck to Loyne" was used by the previous City Council. Loyne is an old name for the River Lune. 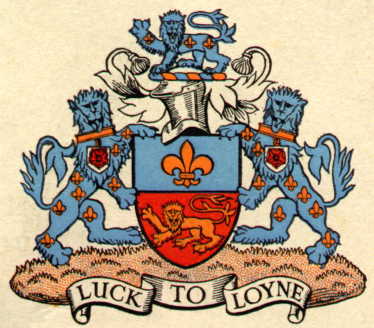 The arms are suggested by the arms and badge of Edmund, first Earl of Lancaster (son of Henry III), who bore the royal lions of England with a label of France (i.e. a blue label chaged with gold fleurs-de-lis). He was first among English princes to use as a badge a red rose, derived from the golden rose which his mother, Eleanor of Provence, introduced into our royal heraldry.

The 'Loyne' in the motto is a form of Lune, the river from which the town takes its name. The Latin form was 'Alauna', derived from Gaelic 'al-aon', meaning 'white river'.